Coach House Players has been in operation in the same location since 1950.  The company is unusual in its longevity and in its ownership of a building which is used for meetings, rehearsals, storage of theatrical materials, and public performances.  The story of the acquisition of our home is quite a drama in itself.  It’s a sort of fairy tale worthy of a book … or perhaps a play. 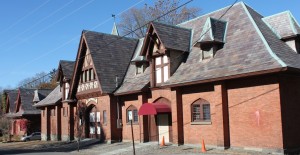 There is a beautiful old building on Augusta Street in Kingston, which was used in times past as a home for horse-drawn coaches.  Built about 1894, it was part of the large estate of the Coykendall family, who were probably of Dutch descent and pronounced their name “Kirkendall”.  The coaches and horses entered the building through huge wooden sliding doors and were uncoupled in the foyer.  The horses were put into stalls on the left; coaches in the room on the right.  Pulleys brought down hay from the loft over the horses; quarters for coachmen and footmen were over the coach side of the building.  Above the horse stalls was a storage bin for oats, with an ‘oat cleaning’ chute that conveyed oats to the main floor.  Somewhere in the building a cistern collected water to take the horses through long summer days.  On Sundays there was an open house; a carpet of white sand was laid over the herringbone patterned brick floor of the foyer and large metal stencils with cutouts of stars, horseshoes, and the like were used to make patterns of colored powder on the sand.  But those days passed, and by 1950 there were no more horses or coaches, no reason for an open house.  The coach house was for sale.  The price: $6,000. 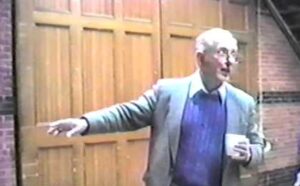 At that same time, there was a community theater group called the “Footlighters” which had fallen into dissension over the question of hiring professional directors.  One faction felt that talent could not grow without an infusion of professional direction from outside.  Others wanted the company to be self-sufficient.  Enter Mrs. Carlyn Gross, a theater aficionado who, with her husband, ran the Governor Clinton Hotel, a posh place of the time.  One resident of the hotel was the lawyer for the Coykendall estate.  George Betts, a Footlighter in the pro-professional faction, received a call from Mrs. Gross, who had heard about the coach house from the lawyer and thought the old building would make a wonderful theater.

In 1950, buying a building was out of reach financially for most large professional theater companies, let alone a splinter group of a community theater, but Mrs. Gross persisted.  She got the price down to $5,500.  Still the coach house was unaffordable.  Memories are fuzzy at this point; perhaps everyone was mesmerized by the appearance on the scene of an angel – a “Theater Angel” in the form of Mrs. Katherine Hayes.  Mrs. Hayes, whose husband owned gold mines in Canada, purchased the coach house.  She then sold it to the group of twelve Footlighter dissidents headed by George Betts.  The sale was informal with manageable terms.  The group quickly named itself “Coach House Players” and hired Houston Richards, a New York professional, as director.

Mrs. Hayes let it be known to some that it was her intention to leave the Coach House to the Players in her will.  She didn’t want the players themselves to know this, lest they be unwilling to pay her, should the gold mines not pan out and she have need of the money.  Well, the gold mines did not fail, and she didn’t need the money, so Mrs. Hayes went to her lawyer for the purpose of including this legacy in her will.  Unfortunately, while in the lawyer’s office, Mrs. Hayes became ill and had to return home.  She died before the change was recorded.  By this time the debt for the building had been reduced to $4,200.

The still-fledgling company couldn’t afford to pay the debt and keep the coach house.  But there were more angels in their midst.  Two of the players got the debt discounted by $1,000 and paid the balance of the loan.  The two were repaid by the company and so the Coach House Players obtained their home.

Like any home, this one houses the possessions of its occupants and, like any home one occupies for over half a century, it is cluttered.  The clutter here, though, is of the magical, theatrical kind.  Nowadays the horse stalls have been replaced by tools and the coachroom is used for meetings, rehearsals, and performances.  There is no sand on the bricks in the foyer, but the clopping hooves of ghost horses can be heard with just a little imagination.  Upstairs the props are pulled up to the hayloft, theater lights adjoin the oat bin, and the sleeping quarters now house the thousands of costumes collected over many years.  Dozens of trunks hold delicate items.  Hundreds of hats are attached by numbered clothespins to lines strung overhead in the barn roof.  The costume room in particular prods the imagination to consider myriad possibilities of “let’s pretend”.

Having a home of our own has enabled the Players to present 200 productions utilizing the talents of more than 1700 people (on stage and off) over the course of more than 60 seasons.  A stage was constructed at one end of the coach room, complete with rope-pulled curtains and spotlights shielded by large soup cans.  But the building, large as it is, was hardly an ideal performance site, so many of the company’s productions were staged at various schools in Kingston.  It wasn’t a perfect home.  As old barns are difficult to heat, members sometimes had the odd experience of seeing paint freeze immediately upon application to sets.  There was a period of vandalism in the mid-70’s that left telephone and electric wires cut, windows broken, and culminated in a serious fire.  However, these hardships had the result of bringing the group closer together.

Starting in 2000, a major renovation of the building was begun.  On-site parking was expanded, handicapped access was improved, metal folding chairs morphed into refurbished theater seats (from our friends at UPAC), movable platforms replaced the long-discarded stage, and the electrical system was upgraded.  In 2005, air conditioning was added.  The bulk of this work was done by members, all of whom are unpaid volunteers.  As a result of their efforts, we now have a first-class performance space suitable for theatrical productions of many kinds.

The Coach House Players membership has risen from 12 in 1950 to over 70 today.  Each year since our inception, in keeping with our charter, we have awarded scholarships to area students who are pursuing higher education in the arts.  Although the Coykendall Coach House no longer houses the stately carriages of days gone by, it continues to be alive with the sounds and sights of community theater at its finest.  You can learn more about Coach House today elsewhere on our web site.